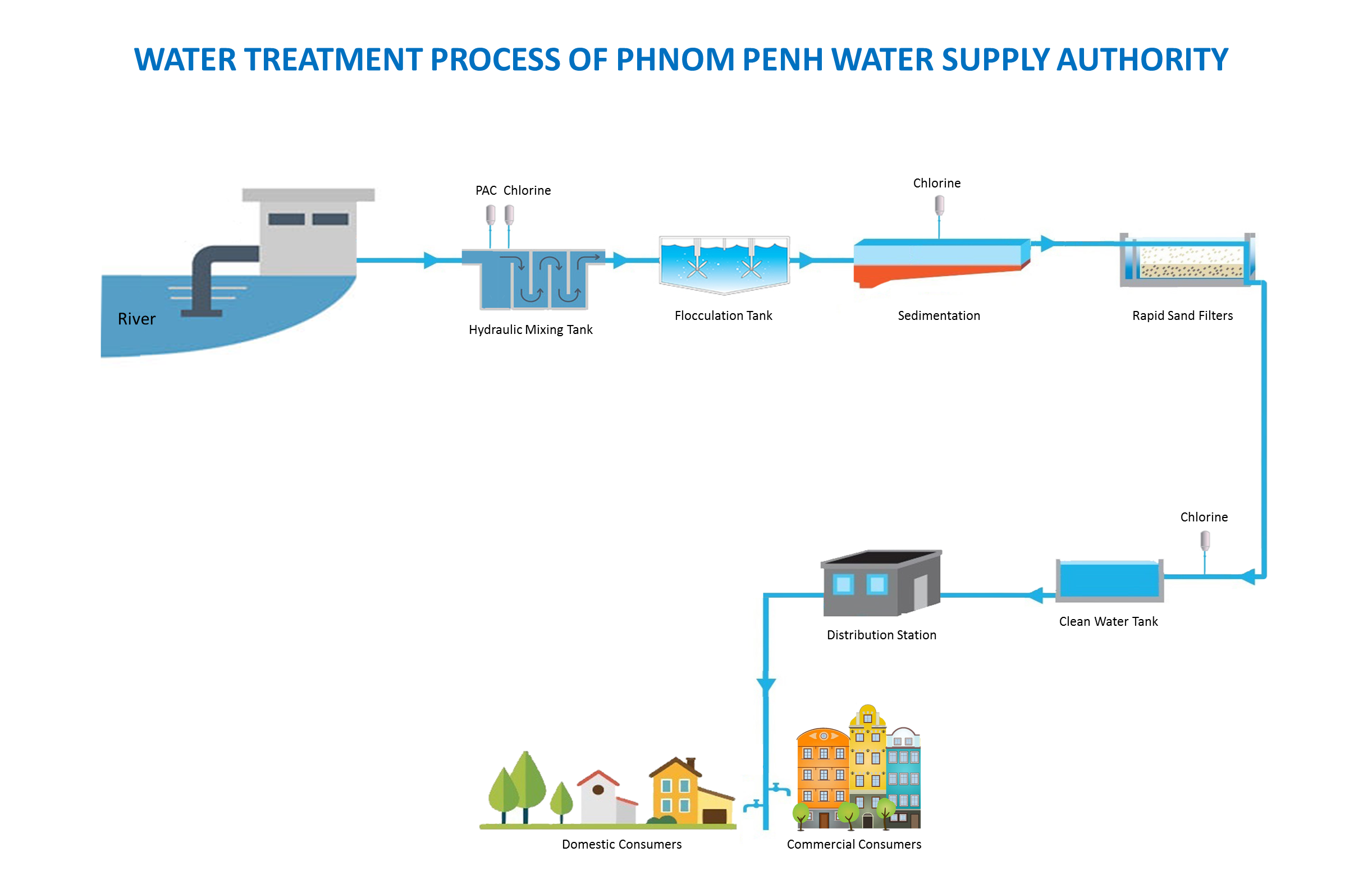 In general, the water level of the three rivers varies with the seasons. The annual water level of each river is different being dependent mainly on weather conditions and the Mekong water currents.

The raw water treatment system is divided into 6 stages: (1) receiving basin, (2) stirred basin, (3) flocculation basin, (4) sedimentation basin, (5) filtration basin and (6) clean water reservoir. Treating raw water (raw water from the river) to clean water requires the use of various chemical substances such as alum, lime and chlorine.
Each substance has different functions in treatment of the water:
• Alum: Agglomerates small particles of sediments into larger heavier particles that can be settled out of the water as sediment at the bottom of the tank. These small particles consist of clay, alluvial soil, organic chemical substances and other wastes from the treatment process, as well as other small organic substances.
• Lime: increases the pH of the water, by lowering the acidity of the water.
• Chlorine: kills bacteria and viruses, and eliminates other biological substances (such as algae) from the water.

PPWSA has conducted studies and tests on the use of chemicals named Poly Aluminum Chloride (PAC) for the purpose of substituting alum and lime with PAC. PAC has a better technical and economic performance and it will be used in PPWSA’s operations from 2012.

The potable water treatment process has the following steps:

• First, the raw water from the source river is pumped by the pumping station to a receiving basin. In the receiving basin, which is the starting point of the treatment process, chemical substances including alum, lime and chlorine are poured into the water. The water flows into the stirring basin. In the stirring basin, the chemical substances are combined with the water by a high speed agitator, or by changes in the speed of the water flowing in the basin.

After being stirred, the water flows to the flocculation basin used for agglomerating turbidity. This basin is equipped with a low speed agitator in order to promote the turbidity colliding and agglomerating to form a larger particle. • Water flowing out of the filtration basin must have a turbidity level of less than 5 NTU. The water flowing out of this basin is injected with chlorine for one more time to eliminate viruses and any remaining algae, and to destroy viruses that may remain in the distribution lines, and in particular within water equipment at homes, such as water basins and taps. The addition of chlorine is checked in order to ensure the level of chlorine in the potable water is acceptable. The potable water from the drain-ditching basin is transferred to storage in a reserve basin and then pumped from the reserve basin into the distribution system. The Intake Tower delivers potable water to the water distribution network. This station is equipped with motors and other control systems, as well as an automatic water pressure control system for assuring stability of water supply.

Chemicals and electricity are the main expenses of PPWSA’s water treatment process, with electricity representing a higher portion of these expenses.

The following table shows the historic volume of chemicals used in the treatment of water. As has been stated, the quantity of chemicals used to treat the water depends on the quality of the raw water feedstock. The quality of the raw water from the rivers is subject to a number of complex factors. Furthermore PPWSA is proposing to substitute the use of alum and lime with PAC to some degree. Accordingly, the actual usage of the chemicals in the future may differ significantly from the historical usage of the chemicals.